2/14/2021
In the days leading up to Valentine's Day, 2021, the Destiel fandom, still reeling from the rollercoaster that was our beloved, 11-year ship becoming canon, followed by the complete denial of the finale, was abuzz. Chad Lindberg, who played Ash of the Roadhouse fame in seasons 2-5 of the show, and Samantha Ferris, who played Ellen, were tweeting vaguely about some event on Valentine's day. There was a rumor that, because someone had tweeted out a season-13 Destiel reference to Chad and he had responded positively, that the Valentine's Day event was, or was open to be interpreted as, Destiel related.

This escalated in a particularly odd fashion. On the fandom side, people planned to hold a Twitter-fandom wide "Destiel wedding" -- cementing that, for us, despite what the finale would have us believe, Dean and Cas are alive, happy, and together, somewhere, in some fictional universe, and with all of us celebrating that, it would cement it as part of fanon Destiel lore.

So while this was happening -- the whole Destiel fandom on Twitter, Tumblr, and presumably elsewhere posting art, fic, and headcanons, playlists, AMVs and manips, and in general celebrating love -- Chad and Samantha were fighting with fans. Apparently playing along with the whole Destiel wedding thing was just too much, and their little Roadhouse Valentine's party roleplay that snowballed into something else was being ruined by these weird gay people. We were "ruining the integrity" of Supernatural, Samantha said. When Supernatural had, on live TV in English and, even more explicitly in Spanish, made the gay angel gay.

In any case, the fandom created some wonderful stuff in that time. The Destiel Wedding Album (link to come), playlists, AMVs, new wedding manips and old ones resurfacing -- I drew a couple (or 4) pieces of art for it myself, which I will add to this box and my art page at a later date.

Overall the Destiel wedding was a beautiful expression of love, both Dean and Cas's love for each other and our love for them, and ultimately ourselves. Even though people were being assholes about it, our silly little fandom event didn't hurt anyone, but what it did do was bring a lot of joy to people's lives at a time when it was sorely needed. 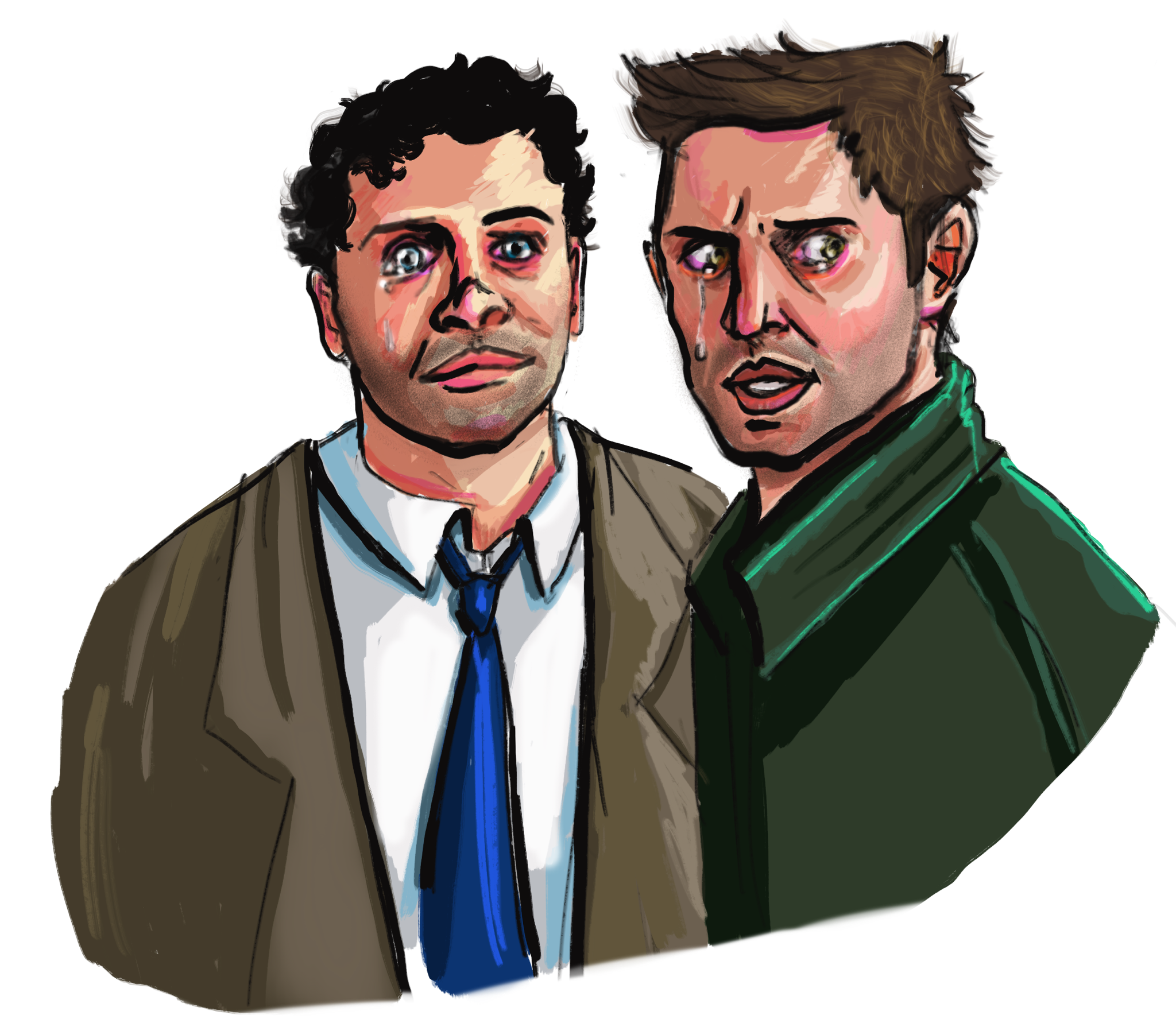 On November 5th, 2020, during the 18th episode of Supernatural's 15th and final season, Castiel told Dean Winchester the truth about his feelings, making Destiel officially canon.

In the midst of the most controversial election in recent American history, the news of a beloved ship becoming canon rocked the fandom, bringing with it a swath of former fans who had tapered off in viewership throughout the years.

The following weeks are a blur of catching up with the show, and all that had happened with Destiel in the years since I had watched. Soon, the LatAm dub dropped, during which Dean responded "Y yo a ti, Cas," or "And I you, Cas," to Castiel's love confession. In the same time frame, an anonymous source revealed that the CW had conducted market research into Dean's sexuality, and had possibly planned to make Destiel canon in season 13 had the results come back in favor. Unfortunately, the results of the market research were, it seems, inconclusive, and Destiel remained subtextual until the end of season 15.

More to come soon on Destiel, the Confession, and how the finale was a complete 180 from the rest of season 15, in terms of Destiel and particularly Dean's arc.

UPDATE: 3/26/22 It's been a little while! I changed up the look of the index page a little. It's getting kind of late so I probably won't do much more tonight but I added a fic recs section, and the Rocky's shrine will probably go live soon. I'm still collecting materials and making stuff for it. The bullet journal has been axed, I might do something with it or might not! However, the dream home vision board stays -- I really like how that page looks, at least on my computer.

UPDATE:2/17/22 I added another box which I've been thinking abt doing -- I am actually gonna change up the whole layout of the main page but not right now because i have an interview for grad school and I've gotta work and take math classes!!! anyways the box is about the destiel wedding, which yeah they just celebrated their 1 year anniversary! I'll make the destiel wedding box more accessible later haha it's kind of a wall of text right now!!

UPDATE: 1/31/22 I added a little box about november 5th??? I will add more to it later! Just wanted to put this up here because idk... seems weird not to mention it on the main page :O

UPDATE: 1/26/22 Changed the pic on the main page since it's not Dean's birthday anymore, but it's always a good time for Scoobynatural. I also put my fanlisting affiliations in a box on my ABOUT PAGE. check 'em out!

UPDATE: 1/24/22 HAPPY BIRTHDAY DEAN! There are TWO new pieces up on the ART PAGE, and I temporarily posted one of them to this page to celebrate the Old Man's 43rd!

UPDATE: 1/20/22 I've been working on a Dadstiel shrine, and I finally linked it on the SHRINES page! It's still a WIP but I think it looks pretty good for now! I also added some of my favorite Destiel amvs to the VIDS page!

UPDATE: 1/16/22 Made some changes to my ABOUT PAGE! I put in a little box to keep all my blinkies in, cos they were just kind of running wild before.

UPDATE: 1/15/22 I have been working on a bullet journal and a vision board related to some personal goals -- feel free to check them out if you'd like! The inks are on my ABOUT page!

UPDATE: 1/8/22 Back from my trip, and new art dropped again! I also added a PLAYLISTS PAGE!

UPDATE: 1/4/22 New art dropped! Check out the ART PAGE! I won't be on the next few days bc I'm taking a BIRTHDAY TRIP to the mountains... see u on the flipside interwebs~

UPDATE: 1/2/22 Set up a DEAN SHRINE! Also updated the credit page, still not complete but better. The shrines page is working now (links were broken). Set up this lil update box!

UPDATE: 1/1/22 Started working on a CASTIEL SHRINE! I'm still working on it, and the credit links are not yet up -- will post those soon! I also set up a page for shrines. Oh and I forgot to post the link but I made a MOODBOARD PAGE.